By A. Ben Crouch

Larry Hall, executive director of Jerome 20/20, has been with the economic development group since June 2015, when he was chosen to fill the position suddenly left open by the unexpected passing of John Blaye.

Larry is a native of Denver, Colorado, and after graduating from high school, attended college at what is now known as Northwest Nazarene University. While attending there he met his wife, Juli. They were in the same math class; he was a sophomore and she a freshman. Catching his eye, Larry asked a friend about her, and the two met and hit it off. They were married in July of 1976 and this year will celebrate 45 years together

After graduating college Larry and Juli moved to Caldwell, Idaho in 1977 where Larry began his banking career, working for Home Federal Savings. In 1981, Larry then accepted a job that took him and his family back to his native land of Denver, where he went to work for a utility company — Public Ser-vice Company of Colorado — in their cash management department. There he helped manage monies and investments of about $80 billion a year. In 1992, after eleven years with the utility company, he was faced with a decision that came by way of the company being bought out. He was offered the chance to stay with the new company, but that opportunity also meant relocating his family and moving to Minneapolis, Minnesota, where the new company was headquartered. The decision was then to stay in Denver or move back to Idaho, specifically Twin Falls. They ultimately chose to move to Twin Falls and for the next several years, Larry held various positions in banking and mortgage lending.

In 1997, he started his own mortgage company called First Advantage Mortgage in Jerome, and operated almost exclusively with Canyonside Realty, working with Bonnie Ross, Dan Suhr, and others.

In 2000 Larry left mortgage lending for Commercial Lending and in 2010, after surviving the Great Recession, he entered the world of economic development and became the executive director of Southern Idaho Rural Development, an agency that served seven Twin Falls County cities. During that same time period, he also served on the Urban Renewal Agency Board of Twin Falls.

Then in June 2015, he became the third executive director of Jerome 20/20 Economic Development Organization. When Larry joined Jerome 20/20, he said there were no projects in the works, nothing on the table. “This kind of work is all project-based,” Larry commented. “We’re a unique organization focused on economic development for the City and County of Jerome. We want companies to come to Jerome and be a part of a place where their employees and families want to live. The components of Jerome 20/20’s economic development efforts are business retention, business expansion, and business attraction.” Since he has been with Jerome 20/20, Larry has helped in all these areas. He was instrumental in helping Mr. Gas come to town with their new truck stop, the expansion of Commercial Creamery, the expansion of Magic Valley Milk Producers, and helping Idaho Central Credit Union make their way to Jerome, to name a few. In addition, Larry was also instrumental in helping Jerome County develop a new comprehensive plan, where he and others put in two hours or more a week for two years, until the new comprehensive plan was finally adopted in 2018.

A big accomplishment for Jerome 20/20 recently was helping True West Beef, a subsidiary of Agri Beef, find its way to Jerome and ultimately help them navigate their way through the planning process and help introduce them to the community. “This is a once in a lifetime project,” Larry said, “the impact of them coming to Jerome could mean as many as 500 to 1,000 jobs and the challenge of Jerome 20/20 and others is to concentrate on three components stem-ming from this new business: 1) recruitment opportunities and training; 2) More housing opportunities to meet the new demand; and 3) Getting ancillary businesses to Jerome (related businesses and suppliers that can work directly with True West Beef).”

In addition to other projects, Larry has been involved with grant writing that has been so beneficial to small businesses and local interests. For example, helping to get outdoor bathrooms at Wilson Lake, funding for the renovation of Broken Bridge, and upgrades such as a graveled parking lot for Snake River Canyon Parks.

Larry expressed gratitude and appreciation for the support he and Jerome 20/20 get from the member businesses, Jerome County, and the City of Jerome. He also said, “We rely on them for both financial and basic support and thank our contributors for their leadership and continued support.” Larry further added that they are always looking for additional involvement and members from the business side, so as to get the best input and participation from the community.

Larry and Juli reside in Twin Falls and have 2 children, a son, and a daughter. The oldest, Jarrett, is married to Robbin. They live in Meridian and have four children: Audrey, Ellie, Austin, and Elias. The younger is Kira. She and her husband, Kirk, have three children, Damon, Tucker, and Andi, and they live in Coeur d’Alene. 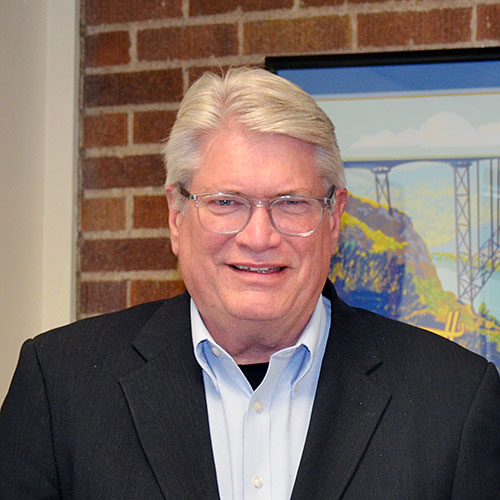